If you compare the portrait of Robert Breckinridge to one of B. B. Warfield you can see that some of the “Breckinridge” physical characteristics made their way down the two generations to Benjamin Breckinridge Warfield. Particularly, the nose, hairline, even the eyes show similarities, though the eyes of Robert Jefferson look like he is not particularly happy. The date of Breckinridge’s picture is not known for sure, but it looks as though the portrait was taken within a few years of his death at the age of 71. Of course, photographs do not show the spiritual and intellectual heritage from a grandfather to his grandson.

Robert Jefferson, John and Mary Breckinridge’s third son, was born at Cabell’s Dale, Kentucky, March 8, 1800. Robert was just six years of age when his father died. As he grew up with his mother he studied under Dr. Louis Marshall who was the brother of Chief Justice John Marshall. Marshall’s school was a classical school and Robert was well educated in preparation for college. Robert’s brother, Cabell, had graduated Princeton in 1810, and his brother, John, was a student at Princeton when Robert was considering where he would further his education. With a Princeton precedent set by his brothers, Robert enrolled in the sophomore class in February of 1817. He continued his studies until he was near graduation when, after a fighting incident, he was suspended. He was restored to his class following the suspension, but the experience did not leave him with a good opinion of Princeton, so he decided to leave and was granted an honorable dismissal. Robert studied briefly at Yale but finally graduated form Union College in 1819 with a Bachelor of Arts.

Robert returned to Kentucky following graduation, but he did not have any direction regarding a definite career. He became a man about town as he wandered from party to party, dance to dance, and bar to bar. He also was a frequent participant in games of chance in Frankfort and Lexington and particularly enjoyed the popular sport of horse racing. Within the course of a few years there would be some major changes in Robert’s life. During the summer of 1822, he became romantically interested in his second cousin, Ann Sophonisba Preston. On March 11, 1823, the two were married in the bride’s home in Abingdon, Virginia. Cabell, Robert’s older brother, had encouraged and directed Robert to practice law, but when Cabell died suddenly in September of 1823, the management of the Breckinridge estate fell to Robert. Along with managing the estate Robert had taken his vocational direction when he obtained his license to practice law in 1824. The practice of law, though, did not satisfy Robert, so in November of 1825 he was elected to his first term in the House of the Kentucky Legislature and was then re-elected to serve until late in 1828.

Robert left public service because of personal difficulties he was facing. Following an illness, from which he almost died, his daughter, Louisiana, died in 1829, and before her death, another daughter had died. Through these troubling events and the pastoral influence of his brother, John, he was converted by God’s grace. It was through a “woods meeting” or revival on his farm that he felt called to the ministry. Pursuing the proper course for presbytery oversight of his ministerial training he came under the care of the West Lexington Presbytery. Seven months later, on April 5, 1832, he was licensed to preach. Following the General Assembly of 1832 where he sat as an elder, then he moved to Princeton, New Jersey, to study theology for a few months under the direction of John’s father in law, Samuel Miller. Robert left Princeton to accept a call to pastor the Second Church of Baltimore succeeding his brother John. He was ordained and installed in November of 1832 and served the church for twelve years.

It was during Robert’s pastoral years in Baltimore that the growing differences between the Old and New Schools led to a division of the Presbyterians in 1837.  R. J. Breckinridge was viewed by the New School as the foremost and most insufferable proponent of the Old School views. An issue, for both Robert and John, involved how missions were to be conducted and governed; they believed that missions were to be governed by the courts of the Presbyterian Church through its boards and not through voluntary agencies. However, fundamentally, the problems the Old School saw with the New School grew out of the foundational issues of subscription to the Westminster Standards and the infusion of the New England theology into Presbyterianism via Congregationalism as a result of the Plan of Union which to some degree had united the two denominations in 1801. The events leading to the ejection of the New School by the Old School in 1837 were driven by the signing of the Act and Testimony of June 1834, which was essentially composed by R. J. Breckinridge to establish the main points of contention between the schools. Robert continued to minister as a pastor in Baltimore following the split of 1837. The Old School honored Breckinridge in 1841 by electing him moderator of its general assembly, but just a few months later he was saddened by the death of his brother John. Breckinridge may be the only general assembly moderator to preach opening sermons to two successive assemblies. In 1842, his retiring moderator’s sermon exposited 2 Thessalonians 1:11, and then in 1843, he filled in for retiring moderator Rev. John T. Edgar and spoke from Acts 15:14, “Simeon hath declared how God, at the first, did visit the Gentiles, to take out of them a people for his name.”

R. J. Breckinridge continued his ministry in Baltimore after the ejection of 1837 until he accepted in 1845 the position of president of Jefferson College in Pennsylvania. The new work and a new location may have been sought to help him recover from the death of his wife Ann in 1844. Possibly, his decision to transition from the ministry to a college presidency had been influenced by a desire to get away from Baltimore and the many reminders of Ann. College administration did not turn out to be Robert’s cup of tea and after two trying years he left Jefferson College to accept a call to pastor the First Presbyterian Church in Lexington, Kentucky. The year 1847 turned out to be an event-filled year because Jefferson College, Pennsylvania honored him with the LL.D., he married the widowed Virginia Hart Shelby, and he was appointed superintendent of public instruction for the state of Kentucky. It was the latter position in which Breckinridge excelled because during his six years of service he saw school attendance grow from 20,000 to over 200,000.

Robert’s next vocational move would be his last and it may have been the most suitable ministry for a man of his experience and temperament. He left his public service work in education to become the first Professor of Exegetic, Didactic, and Polemic Theology in the new Presbyterian seminary at Danville, Kentucky. The seminary at Danville had been established by the General Assembly and its first session began on October 13, 1853. Breckinridge served as a professor for several years continuing until his retirement in 1869. During the Danville years his second wife died in 1859.

The closing years of Breckinridge’s life included another marriage after eight years as a widower. His third wife was Margaret Faulkner White, whom he married on November 5, 1868. As age slowed Breckinridge down, he left his professorship at Danville in December 1869 and he died in Danville on December 27, 1871 after an extended illness. One daughter, Mary Cabell, married William Warfield in 1848 and on November 5, 1851, Benjamin Breckinridge Warfield was born.

R. J. Breckinridge published several articles in the Southern Presbyterian Review and other periodicals, and a number of pamphlets. He edited The Baltimore Literary and Religious Magazine, (1835-1841); Spirit of the XIX Century, (1842-1843), and The Danville Quarterly Review, (1861-1864). His books include, The Knowledge of God, Objectively Considered, New York: Robert Carter and Brothers, 1858; The Knowledge of God, Subjectively Considered, New York: Robert Carter and Brothers, 1859; Memoranda of Foreign Travel, 2 vols. Baltimore: D. Owen and Son, 1845; and Papism in the XIX Century in the United States, Baltimore: D. Owen and Son, 1841.

Sources–Clarification editing was done on this biography August 27, 2015. The photograph of R. J. Breckinridge seated with his cane at hand is held by the PCA Historical Center, Wayne Sparkman, Director, and the portrait CDV is owned by the author of this website. This biography is condensed and revised from a longer version found on the PCA Historical Center website where sources and a bibliography of Breckinridge’s writings is available.

Donald John was born April 26, 1810 the third son of Frances and Isaac Auld, M.D., of Edisto Island, South Carolina. The family’s financial means provided Donald with the best educational opportunities. He was prepared... 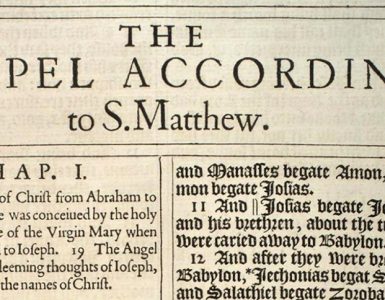 “What’s in a name?” asks Juliet as she speaks to Romeo from the balcony in Shakespeare’s tragedy Romeo and Juliet. Whether a rose be called by another name, it would still have its sweet...

Be the first to know about the latest posts on Presbyterians of the Past.